Butter obtained by hot pressing Theobroma cocoa seeds. Cocoa butter is characterised by a blend of saturated and unsaturated fatty acids: those present in the greatest quantity are stearic, palmitic and oleic acid, which give this fraction a particularly velvety texture and evident eudermic, protective and emollient properties. Thanks to the way it nourishes skin, cocoa butter is used extensively in cosmetics for the treatment of dry, sensitive and chapped skin. 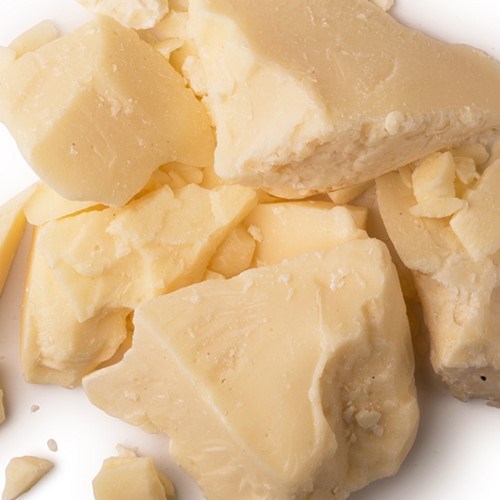 A tree belonging to the Sterculiaceae family, it originates from Central America and Brazil but is now also cultivated in Africa and Asia. The fruit consists of a 12 to 25 cm long pod containing from 15 to 40 seeds which are white when fresh and reddish brown when roasted. Once separated from the fruit, the seeds are roasted, peeled and chopped while still hot, before being pressed and filtered: this is how cocoa butter is obtained.

In ancient times, cocoa seeds were used as currency: the first name of cocoa was "Amygdalae pecuniariae", meaning "money almond"; the name we know it by today, "Theobroma cocoa", meaning "food of the gods" was given to it by Carlo Linneo in 1737. Despite the plant having ancient origins (it was first cultivated by the Mayas in 1000 BC), cocoa butter was not separated until 1828 by the Dutchman Van Houten.

COCOA BUTTER is present in these products